Gallery image with caption: Support Summary Writing with Frames Based on a Text’s Structure 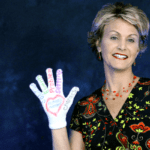 Gallery image with caption: Use the Retelling Glove for Summarizing Stories

Gallery image with caption: Summarize Stories with Somebody, Wanted, But, So, Then

A retelling is like a paraphrase. When you compare a retelling to the original text, it’s about the same length. A retelling includes a lot of the information found in the text.

However, a summary is going to be a little more general. It’s not the main idea, but it’s significantly shorter than a retelling. It’s much more general.

How do you get kids to write a summary? How do you get them to write something shorter and more general–a just-the-highlights version of the original text? First, compare it to ESPN SportsCenter.

Imagine an entire basketball or football game lasting 90 minutes. If you were the sportscaster or commentator of the game, you would have to watch the entire game in order to announce all that happened during the game. That’s the sportscaster’s job–to retell, paraphrase, or interpret what is happening in the game. Because the sportscaster is retelling all the details as they are happening, it will be as long as the original game–90 minutes.

SportsCenter anchors focus on the key characters, important plays, and the pivotal moments told in order. Their sports reports don’t include ALL the details from the game, just the MOST IMPORTANT ones. And, for this reason, the summary is significantly shorter than the retelling. And that’s what a written summary is, too–just the highlights from the passage told in order.

Use sample passages to give students experience turning the original text first into a retelling/paraphrase and then into a summary.