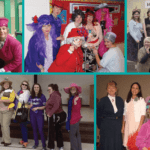 Celebrate with The Test Ladies 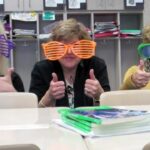 Look for the Test Lady

In preparing his 4th graders for an Indiana writing assessment, David Henry (teacher at Sweetser Elementary in Sweetser, IN) shared Kristina Smekens idea of the “Test LadyTM” with his students–that a particular woman who lives in the state capitol scores all their state writing prompts. He took the story further and revealed a photograph he’d found of a sweet little old lady in a Jackie O era dress suit. She had a little hat and cat eye glasses and was smiling ear to ear.

He named her Vestibule McFlannerty. Since introducing her picture and job description, the students had been referring to her frequently for several days. Then, one day a student confessed he had googled “Vestibule McFlannerty” to find out more about her. He said he found her obituary on the Internet. The student was very sad to hear about her death but was even more concerned about who would be grading their ISTEPs!

Struggling to maintain his composure, David assured the student that he would investigate this information during his break. Later that day, David told his students he’d checked it out, and the woman he’d read about was someone different, and that the Test Lady was alive and well, with her grading pen ready!

If you have a funny student moment to share, email Kristina!